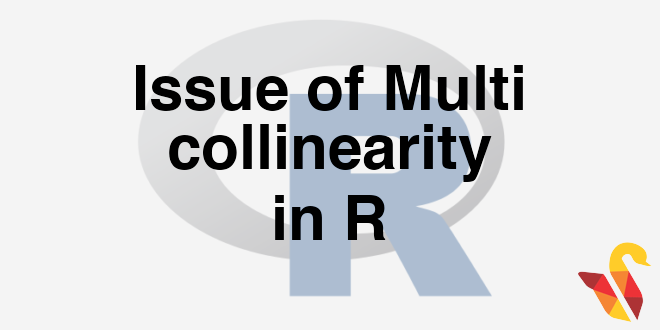 In previous section, we studied about Multiple Regression Issues

Build a regression line x1 vs. X2, X3 and X4 and find the R Square value, say it R1. If the R1 value is higher, that is if the R1 value is around 98%, what does this mean ? This means X2, X3 and X4 together are explaining 98% of variation in X1. We can say that X1 is totally dependent on X2, X3 and X4. X1 is redundant in presence of X2, X3 & X4. This is a clear indication of multicollinearity. Now if in the second case the R1 value is not really high just around 20% then we can say that X1 is carrying some independent information which is not same as X2, X3, and X4 together. Similarly we can build intermediate models for X2 vs. X1, X3, X4; X3 vs. X1, X2, X4 and X4 vs. X1, X2, X3. With the values of R1, R2, R3 and R4, the respective R-Square values of each of these four models, we can easily detect multicollinearity. Instead of finding these R square we can use another technique called VIF . VIF VIF is derived from the intermediate R-Square value 1(1−R2)

is called VIF. VIF option in SAS automatically calculates VIF values for each of the predictor variables There is a function in R which calculates the VIF value automatically. VIF will be calculated individually for each variable. If a model has 10 independent variables, then we will have 10 VIF values. If a R squared is more than 80% for a particular variable then we can say that Multicollinearity exits. Similarly if we get VIF value more than 5 that mean that the variable can be explained by all the remaining other variables, then this variable can be dropped. Multicollinearity might come in pairs, what do I mean by that is, let us say, in presences of X1, X2 is redundant, in presence of X2, X1 is also redundant. So while calculating the VIF of X1 we will use X2, X3, X4 then VIF of X1 will be higher. The VIF of x2 will be higher as well because, we are using X1,X3,X4 if X1 and X2 are related this does not mean we should drop both x1 and x2 if we drop both then we might lose a whole information together , only one of them should be dropped so that multicollinearity will be lost.

Let’s see on the final exam data how to find the VIF values. For calculating the VIF values, we need a package called Car companion to the applied regression. First install the Car package, then build a model named exam.

Now we observe that VIF of all the variables are higher than the 5. But the VIF of Sem1_math and Sem2_Math are really high and we also know that their correlation is also very high. Even though sem1 and sem2 math’s VIF is high, we cannot drop both because, in the presence of Sem2_math , Sem1 is redundant and in presence of Sem1, Sem2 is redundant. Only way to choose the variable which we can drop is the one which is having higher value. So we choose to drop Sem1_Math. Once we drop Sem1_Math, the Sem2_Math gets auto corrected and there will be no Multicollinearity.

The next post is about Linear Regression with Multicollinearity in R and Conclusion.