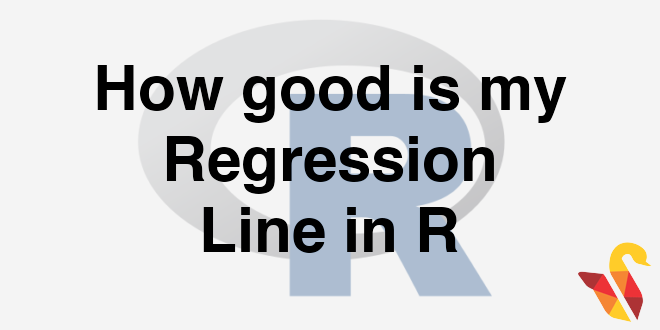 In the previous section we discussed about   Practice : Regression Line Fitting in R

How good is my regression line?

When do we say that our regression line is perfect?

IF SSE (sum of squared error) is near to zero, then we have a good model. Most of the times standalone SSE is not sufficient. For example, if SSE value is 100 so this value is near to 0 or is it far from 0 actually we can’t tell because the value of SSE seems very less if the value of Y is thousands or millions ,so the deviation of 100 according to the SSE value is not really high. But if we are working or dealing with fraction or decimals the value of SSE 100 that is really high, so to conclude that if the SSE is having high value or not the variable Y should bring into the picture. So how do we find that how well or correct is our regression line? To answer these just understand the following derivation which will tell us the goodness of fit of our regression line.

Error Sum of squares (SSE- Sum of Squares of error)

This is sum of squares of errors this should be least for given regression line.

Total Variance in Y (SST- Sum of Squares of Total)

We can rewrite as,

In next session we will figure out R–squared which a statistical measure of closeness of data points to the fitted regression line.